skip to main | skip to sidebar

Click here to see the portraits of the virtual Abraham Lincoln available on our online store. 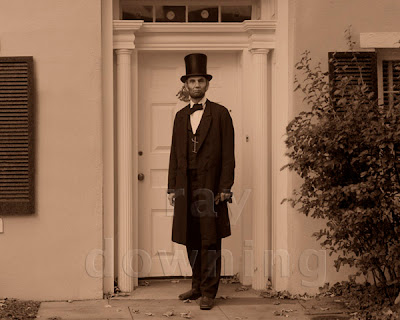 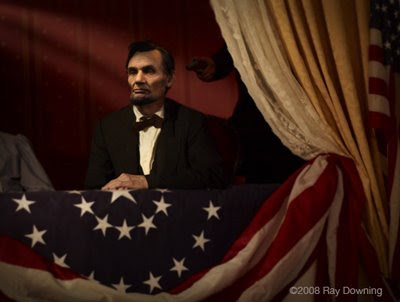 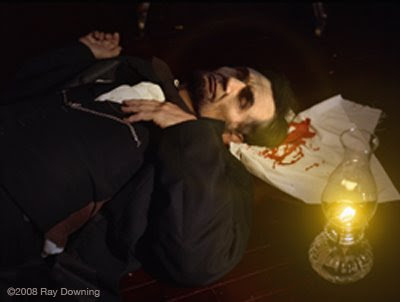 I just finished watching the "Stealing Lincoln's Body" documentary. It was really eerie seeing images of the moving Lincoln. They were wholly convincing: my congratulations to you and your team for amazing work.

It is particularly impressive that you took the challenge of showing him walking. Gait is an incredibly complicated neurological task. There are a hundred things to watch when people walk. One of my professors said that sitting on a bench in a park, watching people walk, was the best way to learn neurology. That's only somewhat exaggerated!

So I noticed (only) two things about the sequence near the end, where Lincoln is walking down the street. First, Lincoln had a flat-footed gait. Ward Lamon [personal friend of Lincoln and self appointed body guard] says Lincoln's shoes wore out evenly across the sole, not heel-first, as in most people. (This is a brilliant observation -- one of my favorites in all the Lincoln canon.) Second, Lincoln's arms tended to swing passively when he walked, as if they were hanging like limp spaguetti. (Of course, the sequence has Lincoln using his arm to greet people.)

After the show I was wondering if your sequences affected other people the way they got to me. Then I saw the "Making Of" short on the web, and heard your comment about Lincoln walking down the street. Question answered.

I appreciated your comments on Lincoln's facial asymmetry to Wired Magazine. I recently had the opportunity to discuss his asymmetries with a group of geneticists, and they agreed with the diagnosis of Lincoln's cranial malformation that's in "The Physical Lincoln" (LSFP = left synostotic frontal plagiocephaly).

I hope you get a chance to continue your re-creative efforts with Lincoln. No actor, or Lincoln presenter, can ever be made up to look the way Lincoln really did. Your efforts are the best ever.
at 6:21 AM 6 comments:

Inside The Lincoln Funeral Car

Online Interviews And Commentary About the Virtual Lincoln

Inside Look At Creating The Virtual Lincoln 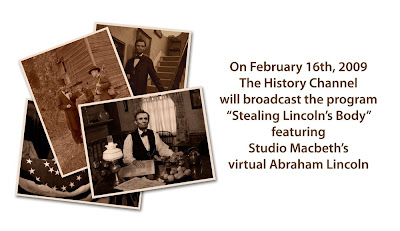 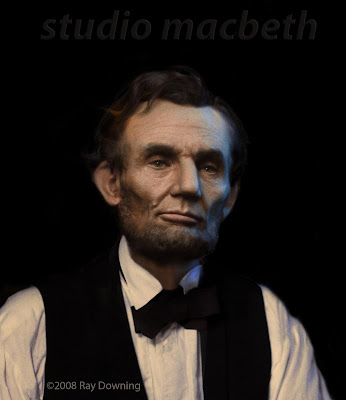 The image above shows the level of refinement and detail that our virtual Lincoln 3D model has attained. We are happy to report that we have just finished the first animated video clip of Abraham Lincoln using this model and we are very excited about the results. We are now starting work on a second video animation which will soon join our growing library. 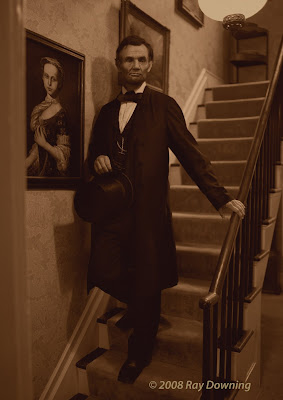 Below is a 36 degree camera rotation of the Lincoln geometry.
at 2:22 PM 1 comment:

Welcome to any newcomers to our blog who have arrived by virtue of Diane Heilenman's piece. I am still slightly crossed eyed from reading the article and having a hard time understanding exactly what her objection is to our exercising our artistic freedom to create portraiture of our 16th president. Ms. Heilenman states that we have "misplaced truth in history and missed the line between history and art". What we actually did is simpler than that. We made some pictures of Abraham Lincoln! We made them the best we could and as believable as we could. We did them with the most sincere affection for our fallen president and made no claim that they were historical artifacts from the 19th century. We would not claim that because we are proud of the work and put a great deal of effort into it.
Ms. Heilenman has no problem with Marcel Duchamp drawing a moustache on the Mona Lisa. To her, that is funny. To her, that is art. We could have drawn a moustache on a Matthew Brady photograph of Lincoln. Would that still be funny? Would that magically turn it into art? The famous portrait of Washington crossing the Delaware should never have been created? What is the difference? Oh, I get it: it looks like a painting and ours looks like a photograph! So paintings should look like paintings and photographs should look like photographs. Bring out the handcuffs. We are now to be reenslaved, 150 years after the Emancipation Proclamation.
Enough of jousting. I hope you like the pictures we are creating of Abraham Lincoln. They are meant to show Lincoln in human situations for which there are no other extant depictions, e.g. Lincoln at table, Lincoln descending a staircase, Lincoln mourning a child. We are not illustrating history, but common human experience which unites people of today with our historical heroes. 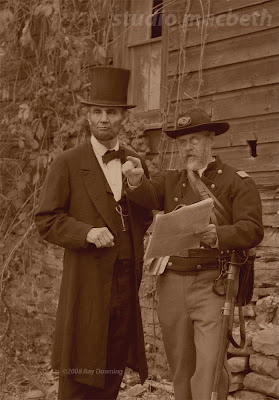 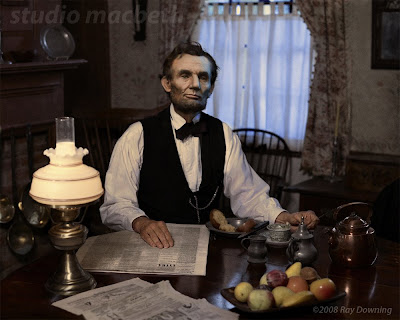 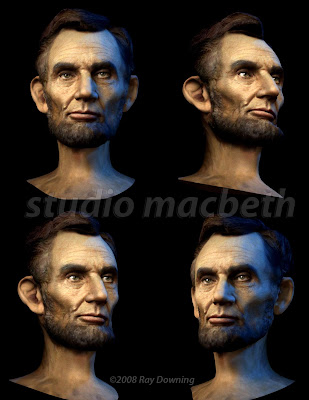 On this post we show our first full color original photo realistic depictions of Abraham Lincoln's face. These computer generated images are the result of our research into Lincoln's facial structure based on photographs and castings from his own time. We are currently engaged in producing video animations of this model, and we will post them when completed. Please take a minute to look into the eyes of this most popular of American presidents. We hope that behind those eyes we have captured the person of Mr. Lincoln and that our viewer will appreciate our efforts to do so.

Studio Macbeth
Studio Macbeth was established in 1979. We have been creating digital illustration and animation for the entertainment, scientific and advertising communities for for the past 20 years. The focus of our work is realism while retaining a painterly sensibility to light and form. Our medical and scientific work is clearly distinguishable from that of our competitors by its "watchability". Using Hollywood style cinematographic techniques, our visual productions recognize and address the sophistication of the viewer. Our central focus is to embed accurate and detailed science in an artistic envelope. Our entertainment and general illustration and animation work takes a complementary approach to our scientific work. For the general public, we use a scientific approach to our visualizations to create an aesthetic believability. Our goal here is to reclaim some of the painterly artistry which has largely been lost since the advent of computerization.